C:Basic - Add-In Casio Basic
＜トップページ＞
Update and correction may be made at any time without notice.

▋C.Basic, a part of C:Basic Project
If you feel your Casio Basic programs are not running fast enough, C.Basic can free you of that frustration.
Get Started with genuine Casio Basic program, then extended commands that C.Basic alone perform.

Currently C.Basic (Basic interpreter) is released and updating for fx-9860G Series (SH3) and later Graphing calculaters. C.Basic (single dot) will evolve into Casio basic Compiler "C:Basic" (double dots), which will run programs much faster than C.Basic (10 times from the looks of it).

C.Basic is provided as an Add-In Basic language which is upper comatible Casio Basic.
Why C.Basic / C:Basic?
Genuine Casio Basic by Casio is a simple language containing minimal functionality in limited hardware power, but it's a practical language allowing us to enjoy 'Structured Programming like' coding. Old fans of Programmable calcs and poket computers who used to enjoy Basic programming well know that the old Basic requires line number. Unlike such old Basic, current Casio Basic can be categorized as a new Generration, so we define current Casio Basic is Caso Basic New Generation. The Casio Basic is very easy-to-use language and you can create programs on your calc only, no PC is required.
You can also create Add-In programs which can be built on your PC with C language SDK and the Add-In runs much faster than genuine Casio Basic. Comparing with Add-In, the Casio Basic is very slow, especially drawing dots on LCD screen is extremely slow. In order to improve speed of genuine Casio Basic, we started development of C.Basic (interpreter version at first) which is compatible with Casio Basic. Currently it gives you much faster computing speed in factor of 10 or 20 than genuine Casio Basic. Now we know C:Basic (compiler version in future) is capable to run x10 or more fasterr than C.Basic (interpreter version).
The C:Basic Project is driven by sentaro21 (author of this Add-In), Krtyski (owner of this blog, testing, making sample programs, suporting development) and some enthusiasts of C.Basic.

▍C.Basic for FX (beta version)
This edition supports supports fx-9860G Series (SH3), fx-9860GII Series (SH4A) and Graph 35+USB/35+EII/75/85/95 (SD).
▶ Get Latest Verion
▍C.Basic for CG (beta version)
This edition supports PRIZM fx-CG10, fx-CG20, fx-CG50 and Graph90+E.
▶ Get Latest Version
NOTE: They are still beta version, so it may includes bugs and there is a possibility to destroy data in your calc (in this case you may need to restart or reset your calc). So it's highly recommneded to make backup of your data before trying C.Basic.

FA-124 is a PC link software which is included in the package of fx-9860G or fx-9860GII Series. For detailed operation please refer its manual. Recently CD is not included in a distribution package, so download FA-124 from Casio Worldwide Education Website.

Font folder and FontEdit folder should also be transfered to the Storage Memory if you want to use extended fonts. 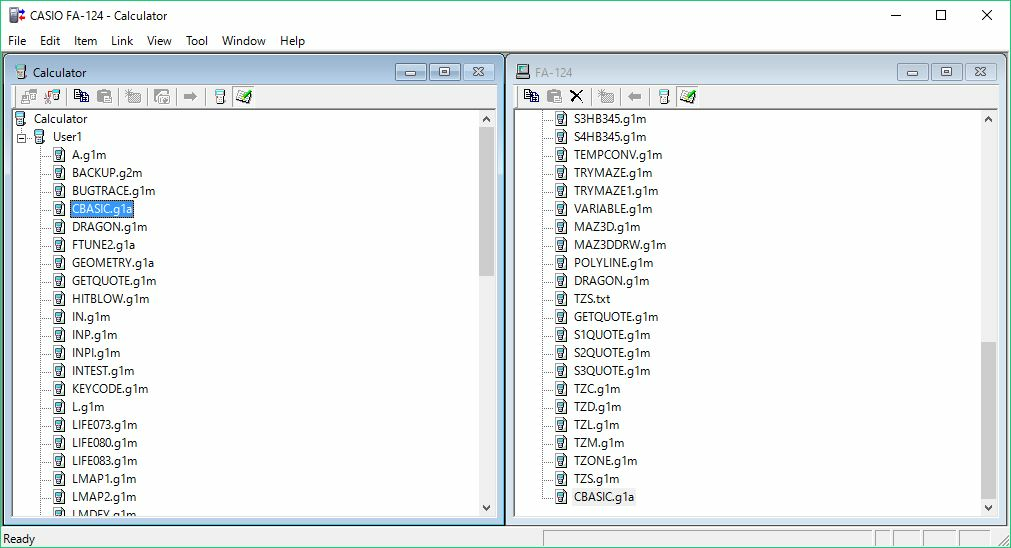 When available storage memory comes low and you want to update C.Basic, it's recommended to delete CBASIC.g1m at first, perform Optimization of storage memory, then transfer latest version of CBASIC.g1m.

For detailed instructions, please refer to instruction manual of FA-124.

Connecting fx-CG Series to your PC with USB cable and open Exporler, then fx-CG is shown as an external drive.

Also transfer HELP3.g3m and HELP1.g1m in Help folder to program source folder, which is Storage Memory as default or any folder you can create, eg. "@CBASIC".

@Font folder and FontEdit folder should also be transfered to the Storage Memory if you want to use extended fonts.

▋How to Use & Command Reference

▶ C.Basic for CGAll those above information are in text files included in downloaded zip file.

To enjoy fast operation, an over-clock Add-In, Ftuen2 is recommended to use with C.Basic.
Review following pages for reputation of this program;
- @ Unversal Casio Forum
- @ CEMETECH
- @ TI-Planet

I have used this Add-In over 1 year, there is no problem found so far. Ftuen2 has well considerred safwty features, so it unlikely damages your calc. But please make backup of data of your calc for sure.

Let me show you capability of C.Basic and C:Basic with sample program(s).

C.Basic is upper compatible with original Casio Basic, and has some extended commands and language functions.

If you want to make a fast bitmap graphics program with original Casio Basic, I can say it's reckless try. But with C.Basic you can enjoy programming of Conway's Game of Life as a good example.

To evalaute capability of C:Basic (compiler version), most frequently porcessd codes of Game of Live Ver 0.74 is replaced by a special command "DotLife" to make the codest run at native code speed.

As you see, it's much faster in factor of 10 until getting to generation 517. Now we believe fully native code by C:Basic (compiler version) should acheive a bit faster computing speed than this case. 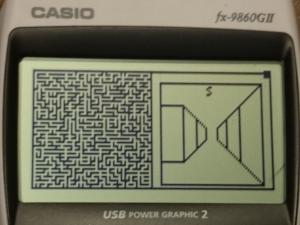 Go from top-left as strat point to bottom-right as goal viewing 3D display in right pane. This rungs on genuine Casio Basic but this is very slow. You should run on C.Basic.

To switch Upward and Downward of flying Dragon, press any key besides [AC], [EXIT] and [0] keys. There are flying mines, do not touch the mines also do not hit mountains.

Pressing [0] key, dragon can "roar" 3 times, which destroy everything, mines and even mountains. Press [EXIT] or [AC] key to quit the program.

Sorry the video has no English subtitle. This program runs on C.Basic with C.Basic original commands. This is a good sample how to use Bitmap handling and drawing functions.